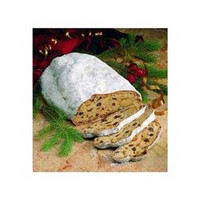 The tradition of baking Dresden Stollen ®  is a very old one and can be traced back to around 1400 A.D. Originally baked without butter and milk, the stollen (striezel) was a rather dull pastry. Elector Lord Ernst of Saxony and his brother Albrecht appealed to the Pope to rescind the so-called "butter ban" in effect at the time. The Holy Father eventually gave in to their entreaties and declared (in what came to be known as the "Bufferbrief") that milk and butter could indeed be used in baking the stollen - this could be done with a "clear conscience and with God's blessing", after making the "appropriate penance".

Around 1500, "Christbrote uff Weihnachten" were being sold at the Dresden "Striezelmarkt", the oldest existing German Christmas market. From 1560 onwards, Stollen-bakers delivered one or two Christmas stollen with a total weight of 36 pounds to the king of Saxony for the holy celebration. Eight master bakers and eight apprentices carried it to the castle. In 1730 "August the Strong", Elector Lord of Saxony, commanded the Bakery Guild of Dresden to make a giant stollen with a weight of 1.8 tons! To commemorate that event, a similar stollen is baked every year on the Saturday before the second Advent at the annual Dresden Stollen Festival.

The Dresden Christmas Stollen ®  has been produced in its present superb form since the beginning of the 20th century. Only high quality, very fine ingredients as well as natural flavours and exotic spices are used. While a basic stollen recipe exists, every stollen bakery (some 150 exist) uses its own secret family recipe handed down over generations. For years, stollen-eating experts have orderd their stollen at their favourite traditional Dresden bakery.