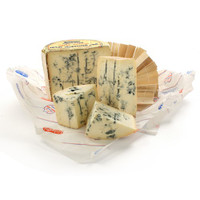 Gorgonzola is the “blue cheese” of Italy and is named for the town where the cows and their herdsmen stopped on the way to their treks to seasonal mountain pastures. Mountain Gorgonzola called ("sharp" or "spicy") is also known as "Naturale" because; unlike its more familiar sibling (Dolce or "sweet") this cheese is aged, usually in a mountain cave for at least ninety days and often up to a year. The result is a drier, more crumbly, more flavorful blue cheese. Repeated brine washings produce a thick dry rind, which many cheese aficionados consider the best part. The interior of an aged Gorgonzola will have a whiter paste and more pronounced blue veining than a younger version. Along with Roquefort and Stilton, one of the worlds most important blues.