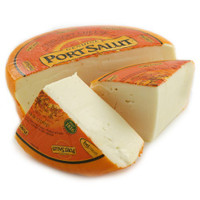 The origin of Port Salut is closely linked to the French Revolution of 1789. Fleeing from the persecutions of the "Terror", a congregation of Trappist Monks set themselves up abroad and, in order to survive learned how to make cheese. When they returned to France in 1815 they built a new abbey and continued to make their cheese. Port Salut is a semi-soft natural cheese that is easily recognized by its orange rind. Unlike many other French cheeses, it is rather mild and sweet in flavor. Smooth and velvety with a lightly acidic taste, Port Salut is still made in monasteries throughout France.