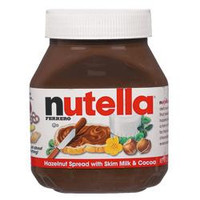 Nearly three generations of Europeans have grown up eating Nutella, which was created in the 1940's by Pietro Ferrero, a pastry maker and founder of the Ferrero Company. At the time, cocoa was in short supply due to war rationing, and chocolate was a delicacy limited to a lucky few. So Pietro Ferrero mixed cocoa with toasted hazelnuts, cocoa butter and vegetable oils to create an economical spread of chocolate that he called "pasta gianduja".  In 1949, Ferrero made a "supercrema gianduja" which was spreadable as well as inexpensive. This product became so popular that Italian food stores started a service called "The Smearing". Children could go to their local food store with a slice of bread for a "smear" of "supercrema gianduja". In 1964 supercrema gianduja was renamed "Nutella" (its origin being the word "nut"), and began to be marketed outside Italy! Today, Nutella is the number one spread in Europe