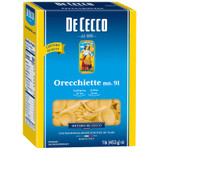 Orecchiette (little ears), also known as "strascicati" or "strascinati" (dragged), are the most typical pasta format of the Pugliese cuisine. The shape is a round disc slightly hollowed in the middle. Their thickness is between 1,25 and 1,35 mm. in the dome part and between 1,38 and 1,45 in the brim. In the Pugliese gastronomic tradition of the homemade pasta, the Orecchiette were made with white flour, durum wheat semolina and water. Once divided into small chunks of pasta, they were "dragged" with the point of a knife until forming a sort of shell, then they would be turned inside out with the tip of the thumb. In the traditional Pugliese recipe Orecchiette are blanched with broccoli or potatoes and then served with tomato sauce sprinkled with pecorino cheese, garlic and a drop of oil. They are also called "Recchie" and served with rich meat, vegetable or lamb and ricotta rags.